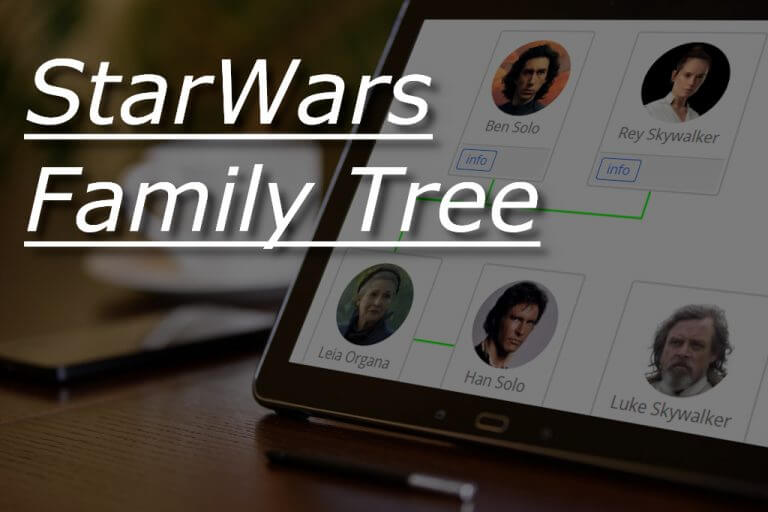 The Star Wars family tree is based on the famous sci-fi movie series created by George Lucas. An exciting task is to follow the family chart of the characters, whether you’ve seen the whole saga or just one episode.

The Star Wars movie is an exciting Sci-Fi franchise that includes several movie series, animations and games. The film started as a trilogy, which was later supplemented with additional episodes.

Now you can take a closer look at how the characters are related to each other!

You can make your own charts using the free OrignTrees Family Builder!

Sheev Palpatine is also famous as The Emperor and with its Sith name Darth Sidious. He serves the role of a powerful villain and as emperor of the Galactic Empire. He is Ray’s grandfather and mentor of Darth Vader.

Padme Amidala is a queen of Naboo and later becomes a senator in the Galactic Senate. She is mother of Luke Skywalker and Leia Organa.

Anakin Skywalker (aka Darth Vader) is a powerful Jedi warrior that is later lured to the dark side by Palpatine. He is the secret husband of Padme Amidala and the father of Princess Leia.

Luke Skywalker is living on the planet Tatooine as a farmer. He trains for a Jedi warrior as a student of Jedi Masters Obi-Wan Kenobi and master Yoda. Later the trilogy reveals that Luke is a twin brother of Princess Leia.

Leia Organa is married for the smuggler Han Solo and later have a son named Ben Solo.

Rey Skywalker lives on the planet Jakku as a scavenger. Later she trans for Jedi as a student of Luke and General Leia.